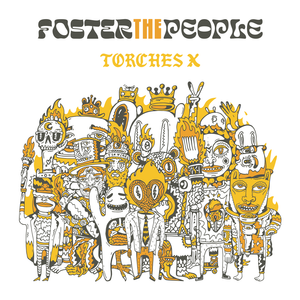 Foster the People will mark the 10th anniversary of their debut album, Torches, by releasing a deluxe edition, called Torches X, on November 12.

The digital release includes the enitre original album — which features the band’s massive hit “Pumped Up Kicks” — plus 10 bonus tracks. Those include the one-time iTunes exclusive “Broken Jaw,” stand-alone single “Ruby,” and “Downtown,” which frontman Mark Foster recorded before FTP got a record deal. You can listen to “Broken Jaw” now via your favorite streaming service.

There are also a bunch of remixes of the album’s tracks, as well as a brand-new version of “Pumped Up Kicks” by Gus Dapperton.

Foster the People will do three concerts at The Wiltern in Los Angeles on November 17, 18 and 19 to celebrate Torches‘ 10th anniversary, and they’ll perform the album in its entirety at the shows. For tickets, visit FosterthePeople com.

In a letter to fans, FTP writes, “It’s been a reflective time for us as we look back on all our experiences from the last ten years. Our lives changed with the release of Torches. That record became our airplane. It was our passport to see the world, to meet so many different people from so many different cultures, and to share our hearts in its purest form.”

The letter continues, “We are so grateful that this album continues to reach new ears still to this day; and especially for the fans that have been with us from the beginning. Thank you for your continued support as we evolve and move into different chapters. It’s been the joy of our lives to be able to make art for you and with you…Thank you for giving us the greatest gift imaginable: a dream fulfilled.”