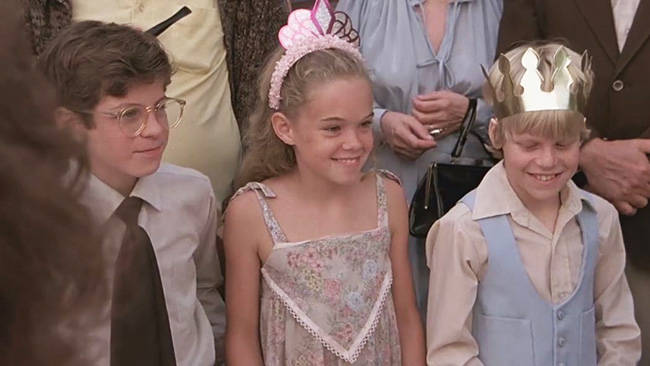 My sources tell me that the principal shooting on this film was done in 1980, but it wasn't released until 1986. While it's no Night of the Ghouls, that should give you an indication of the confidence the producers had in their result. That's especially damning considering that the entire picture is date-stamped. Our opening title tells us that it's June 9, 1970, and after the preamble the next title says June 1, 1980. This picture had no chance at success; it was dated before it was released (and, unlike Night of the Ghouls, there was no nostalgia factor between 1980 and 1986).

Premise, in a nutshell: Think Village of the Damned meets Friday the 13th. Three children are born during a solar eclipse and as a result, they seem to be missing something from their personalities (as an astrologer character puts it, their conscience). Thus, around their collective tenth birthday, they start terrorizing their hometown, murdering with abandon -- because who would suspect that the "psycho" is three cherubic ten-year-olds? One smart high-school girl and her little brother, that's who.

Now, let's look at some specifics:

Raise your hand if you ever -- EVER -- made out in a graveyard. What is it with Hollywood? I've seen far too many movies where otherwise normal teenagers will say, "Let's get it on in the cemetery."

This movie (you can order the best movie review or film essays in our essay writing company) shows how much the school system has changed since 1980. A kid points a realistic gun (it actually turns out to be a real one) at the teacher and gets told, "If you bring that one more time, I'll take it away from you." (By the way, shouldn't that gun have SOME recoil? The ten-year-old snot keeps shooting with one hand as easily as if it were a water pistol.)

This movie proved to me that ten-year-olds (with blankets over their head, no less) do a better job of driving in reverse than I do.

Completely irrelevant scene: About two-thirds of the way through, while Hero Girl is all spooked about the psycho loose, her boyfriend shows up. (Boyfriend? Oh yeah, she mentioned him in passing to her best friend at the start of the movie. He's off in college somewhere.) They have a heart-to-heart, then she tells him that she's not going to college, she wants to be a reporter (!), and she's going to start directing her own life. And then we go back to the story as if nothing had ever happened. Did the producers watch a rough cut of the film and say, "Hmm -- we need some kind of character epiphany in here somewhere"?

By the way, I know that I mentioned Michael Dudikoff shows up in here somewhere. Well, the closing credits list him, but they don't give a character name, and all the guys are wearing shag haircuts, so I didn't recognize him. Anyone else pick him out?